The common marmoset, Callithrix jaccus, possesses complex social behaviors and sleep patterns that closely resemble those of humans. This South American monkey’s metabolism, immune systems, brain structure, and physiology are also very similar to humans. Common marmosets (henceforth referred to as marmosets) can live 10 to 15 years in captivity, and they naturally develop hyperphosphylated tau and amyloid plaques — hallmarks of AD — as they age. Finally, marmosets’ amyloid beta sequence is identical to the human protein (as is those of guinea pigs). All of these factors make marmosets a good match for modeling AD in clinical trials. 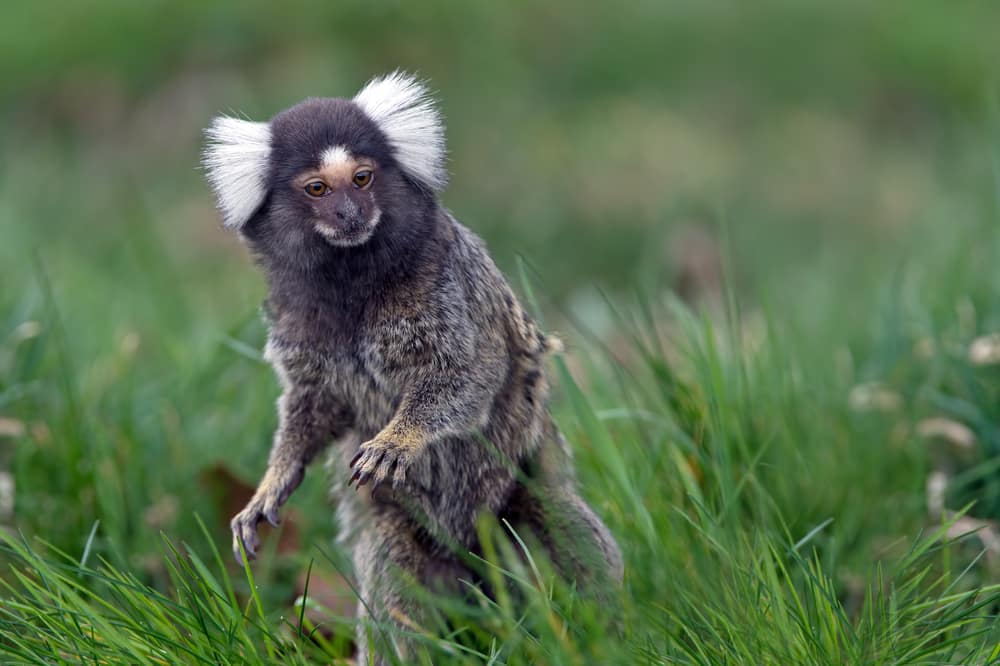 A group of researchers from the RIKEN Center for Brain Science, the Central Institute for Experimental Animals, and Hiroshima University authored a study (available as a preprint in bioRxiv) titled “A non-human primate model of familial Alzheimer’s Disease.” Since a deletion of exon 9 in the presenilin 1 (PS1) gene occurs in some humans with familial/genetic AD, the scientists used gene editing to delete exon 9 in the PS1 gene of the marmoset.

In order to edit the marmoset’s PS1 gene, the scientists used transcription activator-like effector nucleases (TALEN) instead of CRISPR. They chose TALEN because it works more efficiently and uniformly with marmosets, producing less genetic mosaicism. Since homozygous presenilin mutations were embryonic lethal, the authors targeted haploid marmoset ova prior to fertilization. They deleted the 3’ splice site, producing presenilin lacking this exon.

The team fertilized 578 of these altered ova with wild type marmoset sperm. After implanting the 154 surviving zygotes into surrogate mothers, six babies were born; three carried the PS1 mutation. All three babies were heterozygous for the mutation but carried no obvious off-target genetic alterations.

Samples were taken from earlobe tissue to analyze the fibroblasts. Analysis of the samples found that the cells from these genetically modified animals produced more amyloid beta than fibroblasts from wild type monkeys — more than double the amyloid beta 42/40 ratio. This ratio is similar to human fibroblasts taken from human PS1 mutation carriers. If the amyloidosis acts similarly to the progression in humans with the PS1 mutation, the marmosets could be expected to develop amyloid plaques after two to three years, rather than the seven years it typically takes in the wild.

SELECTED FOR YOU:  Advances in Drug Discovery for Central Nervous System Diseases

The researchers posit that marmosets may be more likely than mouse models to develop NFTs since their longer lifespans allow more time for the deposits to form. However, Cynthia Lemere, a neurological disease researcher from Brigham and Women’s Hospital and Harvard Medical School, noted that vervets (another type of monkey) develop lots of plaques but no NFTs over a lifespan of 20-30 years. “It is possible that other factors, such as immune responses to toxins, infections, etc., contribute to those changes. This new marmoset model will facilitate answering these kinds of mechanistic questions,” says Lemere.

Research on monkeys is highly restricted due to animal welfare concerns. Additionally, their long life span and extended time in developing AD symptoms requires a very long treatment time — thus leading to high compound costs. The marmoset model would not replace preclinical drug tests in rodents, but could be a viable alternative for tests in dogs or similar models that need a longer time frame.

The study authors plan to make the marmoset model widely available to the research community to encourage further studies.

Worldwide, 50 million people are living with Alzheimer’s Disease and other dementias. September 21 is World Alzheimer’s Day, the centerpiece of a campaign to raise awareness and challenge the stigma surrounding dementia. With two out of every three people globally believing there is little or no understanding of dementia in their countries, it is clear that dementia remains a global problem that requires global action.